Trust games require that players do not misbehave whilst the game is being played. An atmosphere of safety is required for these games to work effectively. It is important that players feel that they can trust each other. Furthermore, since some trust games have a tactile element to them, leaders should think carefully about their appropriateness with their group. 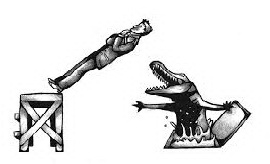 People stand about with their eyes closed. One player goes around whispering in people’s ears what sort of animal they are. When the game begins, each person moves around making the noise of their animal and trying to find other players who are supposed to be the same animal as they are.

One person runs as fast as possible with eyes closed between two lines of people and is stopped at the end by two or three people who form a soft bumper. (this game requires a lot of trust).

Blindfold a partner, and guide them around the hall. Let them learn to trust you (which they will do, unless you make them walk into things)! Then swap over, and be the blindfolded person.

Start by having two people facing each other, and one person in the middle. Push him/her back and forward (make sure the person’s hands stay by their side). Gradually widen the gap, so that they are falling nearer to the ground, and see how close to the ground you can get.

Alternative: have a single person fall backwards into someone’s arms.

Alternative: have the ‘Pendulum’ person in a circle of people that can push them (by the shoulders) in any direction.

Objective of the game is to count to 20 in a group without having more than one person saying a number at a time. However everyone must be sitting in a circle with their eyes closed, and the order of who says what number MUST be random. – much harder than it sounds!

Best place to start is on the… How to plan a Games session page!

If you plan on running a Circus Skills Workshop, then you might want to consider these Juggling games.

If you have a Games Parachute, then here are lots of Parachute Games ideas.

This text was originally created and published as part of a document for Church of Scotland Summer Mission (Holiday Club) teams by Steve “The Juggler” Thomson. This version was updated by many more iMPACT members who I thank for enhancing it with even more wonderful information!