Busking and Street Entertainment (how to…) 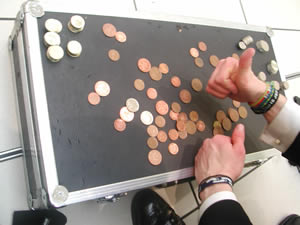 So you have some talent and would like to make a bit of money! How are you going to attract a crowd, what sort of show can you create and how are you going to end up with the money being put in your upturned hat at the end! Do not fear, for this article will help you to get started! It has been said that if you can perform on the street, then you have the necessary skills to perform anywhere!

There is no universal code of conduct for Buskers, although it is common sense that you are likely to get into trouble if you impede pedestrian traffic flow, block or otherwise obstruct entrances or exits, or do things that endanger the public. It is common law that any disturbing or noisy behaviors may not be conducted after certain hours in the night. In the UK places requiring licenses to busk may also require you to audition!

Permits will only cover you for a certain place and they aren’t transferable between different towns, so a lot of buskers won’t bother with them unless they are always going to use the same pitch. Perhaps the best attitude is to simply smile and move on if the Police turn up! Sometimes easier to plead ignorance than ask permission (but that’s for you to decide!)

Watch Out: Buskers can find themselves targeted by thieves, especially if they work alone. It can’t be easy to keep an eye on all your props, and your earnings at the same time, and there is a process called “dipping” or “skimming” where the customer pretends to make a donation and takes money out instead! George Burns (comedian) described his days as a busker in the following way.

Where to Busk (find your perfect “Pitch”)

You could perform the exact same routine in 2 different places and make totally different amounts of money, so finding a good pitch (performance area) is essential if you want to make money. If you can find a place that has high visibility, possibly some seating nearby, low background noise, and plenty of pedestrians walking by then you are in with a good chance!

If you decide to busk outside someone’s shop and they get annoyed with you, then this isn’t a workable pitch and you should move on. There is no point making enemies and making the situation worse for the other buskers in the town by giving everyone a bad name!

Here is a Busking Wikipedia page of all the best known Busking Locations in the world. Be aware that as these locations are the most popular you will most likely need a Busking permit/license to perform there!

5 Steps for Creating a Show

The following notes are written from the perspective of putting on a Juggling show (as I am a professional Juggler) but they will still be of some use for other types of performance such as musicians, acrobats etc. Above all, the show should be car-crashable (people slowing down to see what is happening), fast paced with lots of things happening, and without any change of people getting bored (ditch the rubbish routines and any jokes or banter that isn’t working!)

Your first decision when busking is whether to just perform your skills over and over again in the hope that people might stop and watch you for a few seconds and drop some money into your hat or whether you are prepared to put in a bit of effort and work on a show that lasts at least 10mins (but even better if it is for 20+ minutes) of their precious time. If you can create such a show using the guidelines below, then a sizeable portion of the audience you have gathered will give some money for being entertained when you pass round the hat at the end (as long as you have the right patter to encourage them to do so!)

Volunteer / Audience Participation: Audience participation is usually the most memorable and funny part of street shows! If done properly, the volunteer should always be made to look like a hero and be able to leave the stage with a fantastic round of applause and cheering. If you can make the audience laugh and clap loudly, then this will attract more people to join them! You might even find that you have made some new friends who will be the first in line when you pass the hat round at the end!

Audience Control: If you have gathered a huge amount of people to watch your show, then you will occasionally need to stop your performing and expertly reign them in to allow for other pedestrians to go about their daily business. If appropriate, you may be able to get some kids who can’t see at the back to make up a new front row sitting down. Using a bottle of water, you can draw out a line, and asking the audience to move right up to the line in one swoop is much better than picking on individuals. This becomes easier with practice, and if you can find entertaining ways of herding the crowds, then it can become an enjoyable part of the show and also help the audience to feel like an audience! The first row should act like a fence which should stop other people from walking onto your stage.

Stage: Leaving the stage area creates a mystery (but come back quickly and have a reason for leaving that is explained as soon as you return!) Bringing a volunteer on at any point in the show can renew the audiences concentration and energy. Jumping up high or doing some high tricks, as well as making full use of however large a stage are you have helps change peoples background and perspective.

What you need to consider when trying to squeeze money from your lovely audience at the end of your awesome show! 10 tips and ideas along with some well-used lines that you can adapt.

Hat Line sent in from Jonathan Kutcher – “it would be nice if you could give us five dollars, then we could go to college, but if you give us twenty, we won’t have to”.

If you have any comments, questions, enquiries or juggling trick suggestions/descriptions, please fill in the form at the foot of this page or visit the CONTACT STEVE page for many more ways to get in touch (see top menu for the link)! Please note that I am not responsible for any injuries or damage caused by following these trick descriptions. Be safe!

Steve Thomson aka Stevie Vegas8 hours ago
Steve is great! He blends in perfectly and literally has a bag full of engaging tricks! or treats :)

Steve Thomson aka Stevie Vegas5 days ago
My Client sent me this video clip he edited of my opening performance at his Staff Training Day that I was invited to entertain and run a Circus Skills Workshop at. Only 37secs long and full of some groovy moves - enjoy!