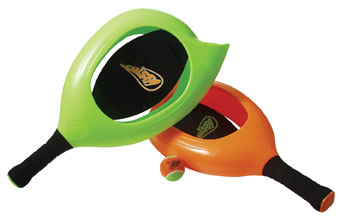 This game was invented by Jean-Charles Hery and won the gold medal in the French Concours Lepine inventors competition.

Catch the ball in the central buffer in the racket and throw to a playing partner or against the wall through the hole in the top of the racket. A variety of fun and addictive play options are available. Chista box pack contains 2 rackets (1 green and 1 orange) and 2 Chista balls.
The Chista racket lets you cushion and stop the chista ball (a mini tennis ball) and then send it flying through the air once again by throwing it out the top of the racket. You could throw the ball against a wall or to another player. If you are used to handling a racket of any type, they you will be at an even greater advantage, and if you have enough rackets and a net, then you could even play a volleyball type version of Chista (see games suggestions at bottom of tricks page).

Grab the racket and place the ball inside. Flick your wrist back with the racket at approx shoulder level and throw the ball in the direction you want it to travel by making a quarter circle upwards with your racket and at the same time bending your wrist forwards. This may sound a lot more complicated than it actually is, so just pick up the racket and have a try and it will all make sense!   You can vary your throws by changing the the angle that the ball leaves the racket and the amount of power you use.

3.     Receive facing front-on, with racket tilted slightly down (useful for when the ball is lobbed at you).

One thing to remember is that just when you are about to catch the ball in the racket, you need to slightly tilt the racket so that you receive the ball at an angle, right in the centre, and bring your arm back to cushion the catch (eg so that you are not stopping the ball dead and causing it to bounce out of the racket again!)

The following suggestions are adapted from the instructions sheet that comes with the Chista game.