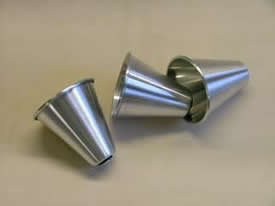 This is possibly the noisiest prop in a jugglers performance bag, as they are made from metal and make a huge noise when they clatter together!

In order to make sense of which cup is which, I refer to a cup that is being held in the hand as the outer cup, and a cup which is nested inside an outer cone is referred to as an inner cup.