I didn’t make it to the BJC last year, so this was the first time I had caught up with many of my Juggling friends for 2 years (as there is no longer a Scottish Juggling Convention to catch up with many of them). Great to hang out with MK Jugglers, Corby Jugglers and Scottish Jugglers especially who all made me feel a part of their groups.

Brilliant this year as there was a noisy camping area which was beside the big top and beer tent, or you could opt for the quiet(er) camping area which was approx 5 minutes walk. This is where I camped, and it was great to be able to get a decent nights sleep. The temperature throughout the week was chilly, but as the event was sponsored by Yorkshire Tea, there were thousands of free (but please make a donation or buy a mug) teabags, which meant that there were several hot water urns which I could use to top up my hot water bottle and stay warm and cosy! Another highlight were the excellent hot showers and clean toilets (much appreciated!) 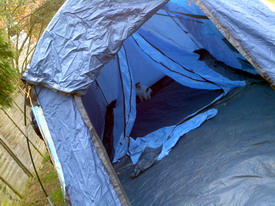 I wasn’t sure what skills I wanted to improve on this year, so I brought a set of all my props. Right from the first practice session, I became hooked on improving my club juggling skills, so I am now a fluent 4 club juggler, and have a wider range of fancy tricks with 3 clubs including the backdrop. I spent a while working on my Parasol and Ball skills also as well as putting in some hours on my 5 ball juggling. 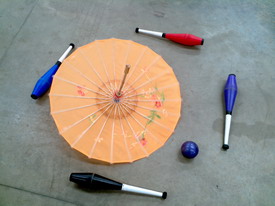 Discovered a fantastic new game called Elk Fest. Really simple, but lots of tactics and skill involved! Also had a few games of Redirect Robots which really boggles the mind! 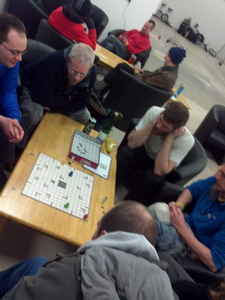 If you needed any phones/IPods etc charged during the convention, you could hand it in to this station and they would rip a playing card in half, which would act as your receipt. The other half would be sellotaped to the item so that you could come back later on and be reunited with it – genius idea, and it meant that you didn’t have to spend your time juggling in corridors where there was a power supply, just so you could keep an eye on your prized possessions! 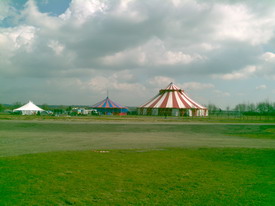 These guys were awesome and very courteous throughout. They always opened doors when jugglers approached, and they must have been freezing cold for the night shifts! By the end of the week, some of the Security team had learned to juggle and unicycle, and one of them got up on stage during a renegade to perform the basic 3 ball cascade trick and got a wonderful standing ovation!

A first class idea! You could write on a BJC postcard provided at the registration desk, and then post a message to anyone at the Convention. It would then be delivered by some volunteers who could hopefully track down the recipient! I got a wonderful postcard toward the end of the Convention which was very encouraging, so I can vouch that this was a fantastic service for the organisers to have provided! 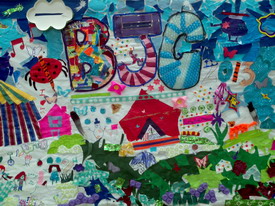 The only downside was having to go off-site to get a wi-fi signal, but this could be turned into a plus as it meant I wasn’t constantly checking my e-mails, and while I was at the local Garden Centre (nearest wi-fi), I could enjoy a comfy seat, and a plate of chips while conversing with Bertie the Parrot!

Team Shreddie Crunch – “The best of the British technical juggling scene! Big numbers, mind-boggling tricks, shared patterns” and plenty of special guests in one fantastic show. Best thing I can do is point you to their 22min promotional video – http://juggling.tv/4595 (enjoy!)

Renegades: There had been a huge amount of debate in the build up to this Convention in regards to how Renegades in recent years have turned into nothing more than heckles and nudity. I think that this discussion and the subsequent ideas that people put forward in the discussions helped this years Renegade to be a lot more skilful and controllable. Many of the acts who were appearing in the Public Show were happy to perform in the renegade towards the start of the night, so it helped set a tone for quality and get people out of the habit of heckling the same responses constantly (at least until perhaps much later on in the night)!

Tiff’s Band: Another highlight of the Convention was being in the beer tent listening to this excellent band and dancing the night away with everyone! 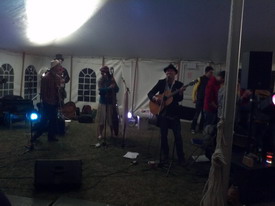 BYJOTY: There were 7 acts this year. It was being streamed live by Jugglinglive.com, so I tweeted and put up on facebook so that friends not at the Convention could watch it. They would have had to endure 22mins of the Compere at the start before the acts actually began, so apologies for those who weren’t prepared to stick it out till the fun began! All 7 acts were good, and I voted for Charles Brockbank who I thought showed the most personality (and bravery – as he did his routine to no music). Dave Leahy won the Gold award (first time this has ever been given in the BYJOTY’s 9 year history) for a numbers juggling routine which was very impressive. 2 of the other acts were dressed as Blues Brothers (pure coincidence!)

Fancy Dress Competition: The theme was “children’s characters” and was judged by the Mayor of Pickering. This event was won by Guy Heathcote (dressed as a Badger), but an honourable mention goes to the MK Jugglers who put on the blue paint and went as Smurfs (they were runners-up)! 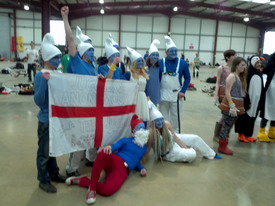 Circus Show:  Excellent show from Pupils from Circus Space and Circomedia. The Ninja act was outstanding! Great chance to see some of the “next big acts” who will definitely go on to great things!

Open Stage: The wonderful Gayle Francis did her hoop act, and was awesome (she still owes me a purple lollipop though)! The Ninja (from Circus Show earlier in the day) appeared with an equally awesome dancing with a broom routine.

Old Skool: An informal chat show where Jay Linn interviewed H from Beard, Charlie Holland (a guy who declined me joining his Performing Arts Course at Circus Space back in 1996), Steven Ragatz and the Comedian and ex-Street Entertainer Andre Vincent. Excellent stories and lots of Oddballs bashing! 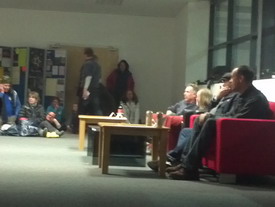 Games: These happened at 2pm on the grassy area to the right of the main building. The weather was a bit windy, but not too cold, and I sat with Dave Vickers and filmed most of it. I only competed a few times (hopping gladiators – lasted a few seconds, diabolo high throw – got through to the second round). Russel Wells did a great job hosting, with Dave Jellybean as his assistant. I have put 10 videoclips of these games in my YouTube Conventions playlist.

Public Show – Caught in the Act!

You can read all the official blurb about the acts and see their professional photo’s on the BJC website. Public Show – Caught in the Act!

96 people attended this meeting (good turnout)! Lots of positives about this years convention, especially in regards to the provision of noisy and quiet campsites, the postal service, security guards and that Renegade was much better than in previous years. The Public Show was unanimously declared as awesome! You can read the official BJC 2013 Convention report (PDF) here. 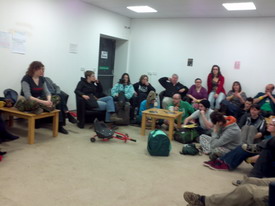 No-one had a rock solid proposal for hosting in 2014. The most likely candidate would be Nathan Rae who may have a possible venue in a Castle somewhere in the North-East. A BJC in Belfast (possibly 2015) was greeted with loud cheers!

Excellent Convention. I hope they can recoup their shortfall in funds (approx £5000, but they have lots of ideas to make this up over the next 12 months). A big well done to the Organisers, and I look forward to next years (if one can be arranged) BJC!

Steve Thomson aka Stevie Vegas7 days ago
Highlights Reel for Stevie Vegas performing as "The PunDance Kid" in the Finals of the UK Pun Championships 2020 at De Montfort Hall as part of the Leicester Comedy Festival. I write a joke every day on Twitter @SteveJuggler