I was stuck in a quiet coach for my journeys to and from Bodmin Parkway (from Stirling). Thankfully, there was only one change each way, so I could just settle in my seat and enjoy a 10.5hr train journey! The Void greeted me as I arrived. Allen Goldie texted me just as I was reaching the registration desk to let me know where he and his mate Niall had pitched their tents, so I set up beside them. Once I had unpacked, I spent a good 3-4hrs practicing my juggling (mainly ring juggling stuff, and improving on my 5 ball juggling and 3 ball in one hand. 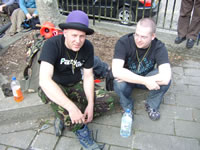 These are the workshops I attended during the convention. I also decided to run a workshop! 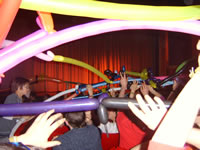 A hat manipulating guy from Swamp Circus was the Compere. The acts were good, but I can’t remember many of them except for Aaron Greg who was doing a very funny routine involving juggling clubs, peanut butter, shrimps and jam! Tonights open stage gave rise to various renegade catchphrases for the rest of the convention, including: 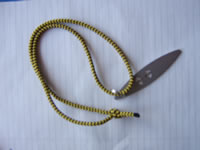 I hadn’t seen this before. Some music is played, and anyone can get up and do any trick they want. The act shouldn’t last longer than a minute, and the style of music changes quite regularly. Seeing the edited highlights the next day in the Cafe showed that this event will be a great DVD extra!

These took place in Bodmin Town Centre. I walked into town with Martin Millard. I then met up with Niall, and Allen who was dressed in his Tartan Juggler costume. Void did an excellent job compering the games, and they were all played in good spirit. I nearly won the highest diabolo toss, and came about 6th in the Devilstick propellor game. Mad Pangea took care of the music and kept the party vibe alive throughout the whole event! Unicycle Gladiators got quite violent, and Aaron Greg easily won the money juggling contest. I got quite far in the money juggling, being sponsored by Niall with  £2 coins!

It seemed well organised at first, but was 30mins late in starting due to a  €œdrops sweepstake where people could guess the amount of drops that all the acts would make in total. This spoiled the very first act on stage, as people were shouting out how many drops he was doing! The 13 acts were all good, and you could see the transformation in sheer ability in the acts that had performed both this year and last year. My favourite act by far was John Peat who did a 6 ball mills mess. He won the overall competition. Lucas did his act dressed as a girl. Arron Sparks cigar box routine was the judges favourite. Zac did a 3 diabolo routine, and there were 2 sets of twins that individually competed in this competition. The drop count was 117! 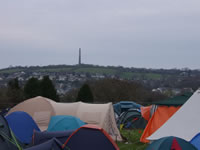 Compered by Aaron Greg. Not many people stuck around for this renegade as the British Young Juggler of the Year show had started late and overran massively. It took a while for people to drift back and begin to participate in this renegade. It didn’t matter, as Aaron had plenty of charm and ability to keep us all entertained and slowly draw out acts from the audience.

I stewarded to direct people to buses for this event. It was held up when we all arrived, so we had to wander the shops for an hour before we were let into the Theatre! There was the usual balloon antics before the show started, and one great moment was when Jak from Jesters had his shop’s name made out of balloons, and fixed it to the front of the stage! The venue didn’t hold enough jugglers (capacity of 350), so the show would be performed twice today, and we were at the first showing. Matt Hall did a good job of compering, but it was always better when he stopped introducing people and did some performance pieces (especially his Kendama routine!) Highlights of the show for me were: 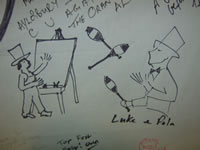 The Dragon Leisure Centre was a good venue. It was well laid out, and all the workshops were within easy walking distance so you could dash between venues when each workshop finished! The Cafe was excellent and reasonably priced. Lovely food, and a great view of the 24hr juggling hall while you ate, as well as a TV playing juggling DVDs. One slight complaint would just be that the tent for the renegades and shows was way too small and cramped, and so most people had to stand to watch the shows, or suffer from leg cramp!

There were regular newsletters produced throughout the convention. I only managed to see one, which was quite funny, and it had the following sentence at the bottom:

Anyone encountering a Ms Hayley Kneale is requested to pass on the following information to her ˜Everything‘s going to be fine, Hayley!”
Everything was fine Hayley! You and your team did an excellent job. A big thanks to everyone involved.