No longer a short journey to reach the Scottish as I now live in the East Midlands! The location was in Edinburgh instead of the usual Glasgow, and also a month later this year. Time to make my pilgrimage home for only the second time since I relocated in November 2008! On arrival by train in Edinburgh, I walked to the Pleasance (one of my favourite Ed Fringe venues which at any time of the year other than August gets used as a Student Union building)! 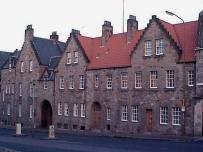 The pass this year was a bit of tye-dyed chipboard on a string! I bought the Convention t-shirt for a fiver and began practicing juggling. Duncan Yellowlees has set up a juggling club in the Borders and was able to bring 11 x 14yr olds with him to this convention!
It was good to catch up with Captain Duncan, Allen Goldie and Gandolf inbetween bursts of energy and actually practicing some 5 ball juggling and my devilstick tricks. 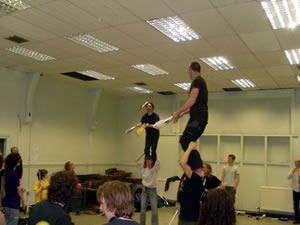 The big let down of this Convention. There wasn’t really any accommodation sorted out. In years gone by, we have been allowed to sleep at the venue where we practice, but this time round, everyone had to wander for 30mins to a large student flat in Leith and just find a place to crash on the floor. It was a large house, but it was also typically student and very filthy. Most people stayed up to party loudly, which made it next to impossible for those people who prefer getting an early sleep (such as myself). 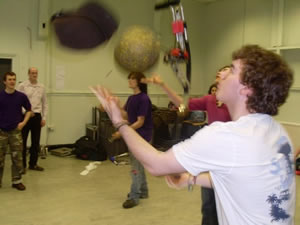 Organised by Sarah Bizkup. I didn’t personally enjoy the Comperes as they weren’t of clean humour which I think is essential for a public show that members of the public can attend with their children. I can’t remember all of the acts apart from the following:

I met Doug Dougal (author of  “Stunning Starts and Fancy Finishes” book) after the show.

I volunteered to organise the Juggling Games for the Sunday, so I spent a large part of the weekend planning the activities. Thankfully I had brought a printout of my Juggling Games page which lists nearly every game I have ever seen played at Juggling Conventions I have attended so it was a good start!
Mats came up with a great idea of writing down all the prizes that had been donated by the traders onto small scraps of rolled up paper which would then be picked out a glass by the winners of each game and this worked really well.
I tried out several new games which I haven’t seen done before and they seemed to work well:

Thanks to Miles Gould for being my wonderful assistant during the Games – much appreciated! I have a mental note that during the”most unique 3 items juggled” game, not to allow any cakes to be juggled as I can recall lots of crumbs exploding in all directions! 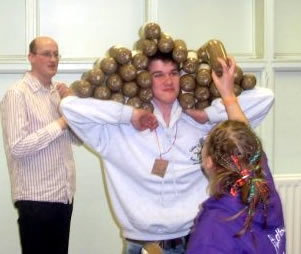 No change in the Haggis World Records. They are still as following:

I didn’t get a chance to compete this year as I was running the Juggling Games and all 100 haggis had already been picked up for the 3 Haggis Endurance before I had time to grab some! 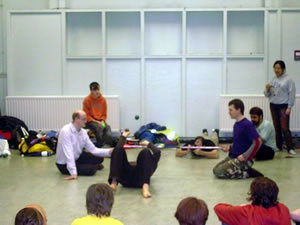 A nice change from the usual convention. At the time of writing (Sept 2009) I haven’t heard anyone volunteering to organise the convention, so keep your fingers crossed that it happens! Congratulations to the team that put this convention on, as they did a good job other than accommodation.