Rach and I set out in her car, with Jonny. Roger and Tim made their own way there, and the girls (Kate, Emma and Amber) didn’t turn up till the next morning. On arrival we got our convention passes (a peg quite disappointing) and I bought 2 groovy t-shirts for  £10! Approx 16 people from the Isle of Man attended the event, including the wonderful Hazel and Kayman.

For the whole convention, my wife Rachel had a migraine and didn’t feel too well, so I didn’t get involved as much with everything this year, as I was torn between looking after her and trying to practice some juggling routines for some performances coming up in the weeks following the convention.

No Captain Duncan or Lorna or Kirree this year, which was all disappointing, but lots of new faces! My aim was to improve my 3 balls in one hand juggling, and improve devilsticking, and learn some diabolo tricks, and learn 5 ball juggling, and learn some ring tricks (from a 10 page article I printed out). Unfortunately there were so many people juggling in the main hall and in the corridors, that it was very hard to find a place to practice my juggling. I eventually settled for upstairs, but soon that was crammed full of jugglers too!

Britta was compere this year. She did a good job, and held the show together well. Due to various things happening in the buildup to the convention, some of the acts that have done the same routines for the past few years at this show weren’t present. This resulted in a much more original show thankfully! The Public show was at 3pm in the Science Centre. It is normally at night-time in a venue where we have to catch the subway, so it was good having it so near. It was well attended by the public who could watch for free.

An excellent show, different from all previous ones due to venue (no UV available due to bright daylight shining into the atrium for instance!) and lineup. Well done everyone! My personal favourite routines were Ruth’s Sock poi, and Matt Hall.

No shortage of girls to dance with for me this year! I danced with Hazel twice, Kate and Amber once each. At half-time some people went outside and did some fire juggling practice. Stopped halfway through and never really restarted as jugglers started playing gladiators! I managed to join in and win about 7 games out of the 50+ that I played. The band were great, and the drummer at one point managed to keep a beat going while juggling the drumsticks!

No renegades on the Friday night as no-one could be bothered organising it. I co-hosted a renegade last year with Andy Blackett, so I passed on doing it this year, and Jonny decided to go for it as Compere for the Saturday night. He seemed to be expert at winding the entire crowd up, but it produced a whole load of extremely funny heckles! At one point, when he began listing all of Matt Hall’s credentials before announcing his name, I stood up and said  “it’s me”! It got one of the biggest laughs of the night, as I sat back down again and ushered Matt to take my place on stage! Matt congratulated me on the heckle the following day, which is excellent as he had drunk a lot and still managed to remember me! Matt Hall did another new first-time in public club juggling act which was awesome. Ewan did some flair bartending stuff. I did the ball juggling bird impressions act. Andy Blackett did some jitter ring stuff while having a blue carrier bag on his head. We were all relieved when he took it off as he was starting to look very faint indeed! Pascal did an even more impressive routine than the one at the Public Show (probably because there was lots of audience interaction which he managed superbly!) There was a large UV section of the show, at which point Jonny left as Compere, and James took over. I had never seen UV diabolo (and string) routine before! Definitely time for bed at 3am when the renegade finished!

Breakfast was excellent, complete with the traditional jelly and sponge fingers! Newspapers in abundance for everyone to read. 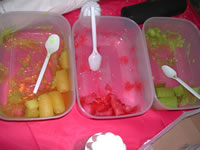 Luke did a whitewash breaking each of his previous world records for 5, 4 and 3 haggis endurance. I was down to the last 4 with the 3 haggis juggling, and then dropped after 5mins 34seconds. Andy was next to drop, then Rob and Luke decided to give up at the same time so they now jointly hold the record. The whole haggis juggling event was being filmed by the Discovery Channel from Canada. 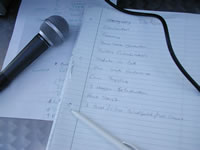 RAFFLE: this happened while the 3 haggis endurance was going on (an excellent idea!). I won the very last prize (a club juggling step by step book (I have loads of them in my juggling store!) I gave it to Roger who had just recently learned club juggling.

SUMMARY: A good convention, which I would have enjoyed a lot more if Rach had been healthier for the whole event. Graham and Britta did a wonderful job once again (especially considering that they are the organisers for the British Juggling convention coming very soon!) The public show was awesome, and Matt Hall really was a fantastic person to headline and to take part in everything.