I had an overnight gig working alongside Out of the Box Puppet Ministry up North at Portsoy Boat Festival on the Friday and Saturday before the Convention (which started on the Sunday), so as soon as that gig had finished, I began the long drive home to pack, then a few hours sleep and we left at 5am for the EJC!

My wife Rachel and I had never been to Ireland before, so this was as good a chance as any to visit! We headed across on the car ferry from Stranraer to Belfast, then drove the whole length of Ireland to reach the venue in Co. Cork! It gave us a chance to see a bit of Ireland as well as get completely lost in Dublin instead of bypassing it on the ring road! We never managed to work out how to change our cars mileage to kilometres, so we had to try and work out all the speed limit signs as we reached them!

The Green Glens Arena was built to host the Eurovision Song Contest way back in the early 90’s. It was the year that Riverdance became a worldwide phenomenon! Maybe they will put up a plaque stating that the EJC was held here also?! 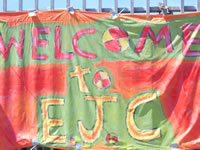 We arrived and got our tents set up just in time so we could watch the World Cup Final Penalty Shoot-out in the bar area between France and Italy. As this is a European Juggling Convention, there were plenty of French and Italian people huddled together, and lots of emotion as Italy won!

The shows were always at night, and there wasn’t many workshops on the board during the day (especially earlier in the week) so we took the chance to spend a while in Cork and Killarney. Both are beautiful places to visit. 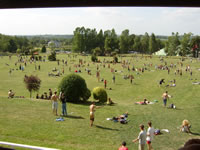 Most people tended to shower on site, but that involved getting tokens and queuing. Rachel and I would head into town in the morning, shower at the GAA Hall, and then go for breakfast at Nibbles which had excellent food and friendly staff. 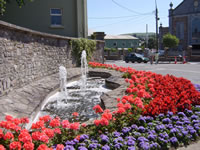 Our friends visited the Convention for a couple of days, and we had a BarBQ with them on site. James ran a swimming workshop which was well attended (as the weather was making everyone hot and sticky!)

It was great to finally meet Erik (who makes Erik’s Poi) at his stall, as I have been selling his excellent poi in my juggling store for a while now. I bought lots of magic stuff from Kablitz. This time last year, I would have been able to just cross the road to purchase from her! Juggling.TV did a great job playing DVD’s on the large screen at the bar area throughout the convention. They also filmed the JuggleJam which I look forward to seeing as a DVD extra! 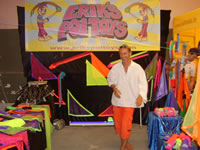 The following shows are the ones that Rachel and I saw. There were at least 2 shows every night plus Massacre (renegade) so we didn’t see everything!

The Convention was not that well attended, and there was a distinct lack of volunteers, meaning that it was only later on in the week that the workshops boards began to fill up.

Lots of fake (but funny) workshops put up on the board, such as:
1) Sleeping workshops  “all day in main hall“ all levels. Just join in, don’t wake me
2) Prancing around like a ninja  – all levels
3) Blood sport – 2pm  – Knives welcome
4) Chris Bliss masterclass – bring your own knives and chainsaws to the massacre tent

I ran 2 workshops this year: 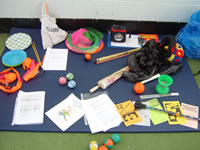 Other People’s workshops I attended

Excellent fun. The locals flooded the streets to watch, and Millstreet Pipe Band led the parade! 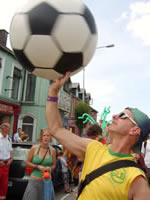 The heats for the long-distance club passing seemed to go on for ages as people kept on cheating and re-entering the competition! I entered the devilstick propellor obstacle race, and the high diabolo toss. After 5 heats of club gladiators, with the 5 winners set to face each other in the final, it was disappointing that they were given novelty caveman clubs to juggle with instead of fighting it out expertly! 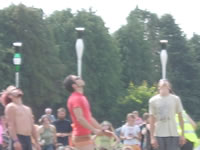 We had packed up the tent into the car in the morning, and as soon as the public show finished, we drove to Belfast. The queue for the 2nd public show was blocking our way out the car park, but they all gave us a very warm send off and bowed as we drove past! We decided to listen to Irish bands all the way to Belfast, so we put on CD’s by the Cranberries, U2 etc! We stayed at Emma and James flat overlooking the Belfast Terminal so we didn’t have far to travel when we woke up the next morning! When we reached Scotland, we went home via Electric Brae (near Ayrshire)

GOOD POINTS: We really enjoyed this convention. The weather was fantastic the whole week. At least 2 shows to watch each night! The locals were the friendliest of any EJC I have seen. Early in the morning, a group of elderly residents of Millstreet would be out picking up litter in the main town centre, just so we all got the best impression of the place! There seems to have been good build-up activities ran by the EJC staff in the run-up to this convention, as everyone knew about this event, and many had taken part in circus skills workshops activities and bought tickets for the Public Show.

BAD POINTS: The convention wasn’t well attended, which in turn meant that there wasn’t enough volunteers or enough workshops running (especially earlier on in the week). Most shows started later than advertised, and there were always queues of people being assured that it will be just 5 more minutes. Just be honest so we don’t waste half the convention standing around when we could be juggling!

Thanks to the organisers for an excellent Convention!

Find out about more European Conventions:

Back to Juggling Clubs and Convention Reviews Page