Having passed my driving test back in July 2005, this was to be one of my first trips by myself in the car to the middle of Glasgow. As expected, I came off the Motorway too early, and ended up going past Buchanan Street Bus Station and straight through the middle of Glasgow instead of round the outside! I was so glad to arrive safely… eventually! 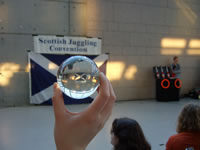 I was recently introduced to a man named John Rodger who has designed what could be a fantastic glow staff. I arranged to take it to the Scottish Juggling Convention to let people try it out, on the condition that if it got broken, then I wasn’t held responsible! He agreed, and also gave me a shorter version of the glow prop to take with me. Sure enough, after a couple of people had tried it out, and others began getting excited about it, the casing came down over the on switch, and we couldn’t get it to light up, so I only got minimal feedback for John, but I look forward to his new and improved version, and even better than that, the glow devilstick he is going to produce (devilstick is my favourite prop!)

This Convention saw the best turnout of people connected with Stirling Juggling Club (old and new!) We had the following people all make an appearance:

Most of us set up our base in a corner of the downstairs hall.

At this convention, I mainly practiced and improved my 5 ball juggling (which I couldn’t even do at this time last year), and also my 3 ball in each hand (I can get approx 30 catches in either hand). I decided to practice toothbrush twirling, so that I could gather an audience and meet new people, and 4 people joined in! I then did another workshop for Beach Flingo which went down well! Most people haven’t seen either props being used before, so it has a novelty factor!

Ruth (Azrelle) had to pull out from the show, otherwise I am sure she would have got a fantastic write up from me for the 5th year running!

The best public show yet! Certainly the highest profile names compared to previous years. Tempei and Ivan Pecel were awesome and highly entertaining, and the overall standard was much better than last years public show.

There was a Te-Pooka Fire Show immediately afterwards. It was very cold outside and I hadn’t brought warm clothing, so I must admit to spending most of my time feeling very cold and not concentrating! They had a spectacular finale where Meg did some staff spinning with 2 fireworks attached to the staff. Awesome and original stuff!

Emma and James had never really Ceilidh danced before, so myself and Amber partnered them for a couple of dances. The large hall was very hot, and after each dance, we had to cool off! It was a great Ceilidh and the band were excellent. During an 8 person dance, we were joined by a 9th person who just wanted to take part in the dance. She seemed a little annoyed that we were ignoring her and trying our best to keep to our formation though! 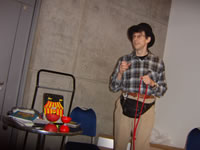 Ruth (Azrelle) hosted. I had planned on being the opening act, and had my props all laid out, but my Songs Mix Routine is on tape, and there didn’t seem to be a tape player in the entire building! This was the low point of my convention, as I had looked forward to doing this well rehearsed routine for many months.

I am improving with my 3 haggis juggling each year, and this time, I was down to the last 2 people standing, but after approx 6mins 30 (just under halfway to the world record) I dropped! The winner dropped about 20 seconds later! The raffle took place during the 3 haggis juggle, and my number was the third out the hat, but I couldn’t claim my prize!

Graham Benson asked me if I wanted to host the Juggling Games, but I turned him down as I wanted to win most of the events!

We did all the usual games, plus a few new ones (mainly involving the teaspoon convention pass!) I won the stredging with Jonny for the third year running, and I also won the 4 scarf endurance competition. I won a couple other games, but I can’t remember which ones, I just remember winning lots of sweets each time and sharing them with different groups of friends!

Jonny and I set off after the toss-up at the end of the games. It was a more straightforward journey, although at one point, I began heading down a one way street the wrong way! My driving will improve for the next Scottish though! Rachels plane had overshot the runway at Luton, and the airport had been put on terrorist alert, so I didn’t need to go and pick her up as she was going to have to stay overnight and get a flight home on the Monday instead, so I headed back to Stirling and went to the evening service at Stirling Baptist Church, falling asleep in the back pew until someone woke me for communion!

Another great convention. Thanks to Graham and Britta (and any other organisers) I njoy the Scottish more each year, and there’s more people I can encourage to come along who are in some way connected with Stirling Juggling Project, and there is usually a slight increase in numbers back at our club each Wednesday following on from the Scottish!

I am looking forward to next years “Scottish” already! Hopefully it will be in the same locations again. Hard to see how they can improve the excellent public show, but I am sure they will manage it, and I may even get to do my renegade act next year if I bring a tape player!

Steve Thomson aka Stevie Vegas23 hours ago
Steve is great! He blends in perfectly and literally has a bag full of engaging tricks! or treats :)