A very packed car for the journey South as Allen Goldie offered to do the driving and had to fit all of mine and Sarah Bizkup’s stuff in his car also! Good banter on the way to and from the Convention. We enjoyed listening to Green Day’s  “Bullet in the Bible” CD for a large part of the journey which took 6hrs each way. 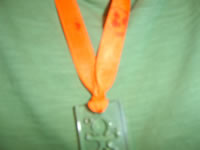 I had gone overboard and bought an 8 man tent for a very cheap price, brand new off Ebay. I had tested it beforehand and it seemed fine, but on the 2nd night, with 50-60mph winds roaring through the campsite, the fibreglass poles collapsed and the tent fell in on me! Unfortunately the rainwater soaked and ruined my mobile phone so I was homeless and phoneless within the space of a few seconds! Thankfully by the afternoon I got an offer of 2 tents within the space of a few minutes (thanks Noeleen and Elroy!) and I was able to buy a new handset for  £20 and transfer my old SIM the next day, and get a refund (minus return postage) for my tent when I got home, so it all worked out ok in the end! The lesson I have learned this time round is to only take the essentials eg no need for a double airbed) and pack lightly (no need to take one of every item of juggling equipment just in case I fancy using them at a workshop!)

Here are details of all the workshops I attended during the Convention.

Jools was an excellent compere. Haggis and Charlie on top form as usual. I don’t think I would ever tire of their routines and top class banter! Old school 7 club passing routine, whipcracking and hat manipulation. There was a 10yr old boy performing some 5 club tricks (how the juggling world has progressed in the past decade!) The Magician and Assistant miming a routine to music  “ top class and very funny! The Void, Tom Derrick and Guy Heathcote performed an excellent hip hop kendama routine. 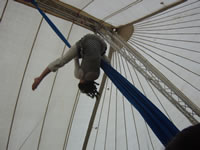 First few acts were musical. One guy spun a plate attached to his head while playing Toccata and Fugue on his keyboard (see photo)! It wasn’t compered by anyone, and eventually Rossy got up and did loads of poetry including the much requested “invisible poo”!

Hosted by a local acrobat called AJ who did a great job. There was a great tap dance/ball bounce guy. Vodka and Orange’s colour science routine has progressed a lot further since Meghan performed it solo at the Scottish Juggling Convention!

No amplified music after 11pm meant that the renegades weren’t going to be as good as they could be. It also led to more people starting to sing Bohemian Rhapsody and other such songs during acts which would have been better with silence or their own choice and tempo of music. There weren’t many fantastic acts that I can recall at the renegade during this Convention. I even remember two guys going on the stage to set up a huge domino rally (they were promptly booted off!) 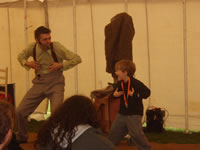 The renegade tent was far too small for the size of crowd that wanted to watch most shows, especially this one which I had to view from outside the marquee holding the tent flap open and only seeing from the performers waists up! All the acts were good. My favourite (Freddie) won! I also enjoyed Nina’s Cigar Box routine.

I didn’t join in with the parade as I had nipped into town to get a new mobile phone (see disaster paragraph near start of this review!) It wasn’t a particularly lovely route that they had followed (through some wasteland) and it was tipping down with rain. The games were therefore cancelled. I didn’t realise they had been rescheduled, so I missed them the following day! 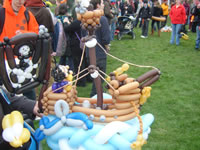 I sat with Dunc. The lighting, music, staging and seating were brilliant. Hard to believe that this was the 24hr juggling hall! The show was awesome. Donald Grant did an excellent job of compering and came out with one of the best juggling puns I have ever heard  “Shepherd’s poi”! My favourite act was a Japanese guy called Symbolo which involved balancing teapots and a strange ball contraption with hoops and tunnels! Hat manipulation guy was great, Hackysack act unique. 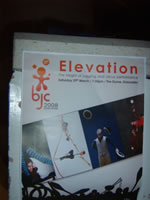 Las Vegas and the International Playboys

An excellent band who set a great mood in the renegade tent once the Public show had finished. A great range of songs all given the Ska treatment!

I decided on the Sunday morning to try and find a Church, but no-one at the Doncaster Dome reception or Convention reception could tell me where the nearest one was, so I took the 20min walk into town and found several that were just finished (the clocks had went forward overnight, so I would have been on time any other Sunday!) I eventually turned up at St James Church of England and although they had just finished, I was invited in to have refreshments and was able to hand out business cards to a few people as I am moving to the Midlands soon so the work could come in handy!

Happy 21st Birthday BJC! Another excellent convention. Many thanks for all the hard work that the organisers and volunteers undertook. Excellent venue, and great convention pass and incentive for volunteering (being given the little man to complete the pass!) The British Young Juggler of the Year show gets better and better each year and the Public Show was awesome!

The downside to the Convention (just a few!)
* my ruined tent and mobile phone
* washed out Games and Parade.
* The Renegade tent needed to be much bigger to accommodate everyone who wanted to see the shows. Renegades were uninspiring, perhaps partly due to the 11pm  no amplified music rule

Already looking forward to next year, especially seeing as it is possibly taking place in my wife’s hometown of Norfolk! Might not even need a tent 😉