If you are able to juggle successfully with two scarves in your dominant hand and your weaker hand at separate times, then these are the skills that you need to merge in order to become a successful 4 scarf juggler! For the opening pattern (the fountain), the scarves never cross to the other hand.
A good idea is to use 2 scarves which are one colour and 2 scarves which are another so that you can make sure that the scarves do not cross over! These rules apply for any even number of objects you wish to juggle (6 rings would be 3 rings in each hand, 8 balls would be 4 balls in each hand etc. For further advice, please see my Numbers Juggling article.

So How do I start?

Begin by learning some 2 scarves in one hand patterns. Take extra time practicing with your weaker hand especially.
2 Scarves Clockwise and Anti-Clockwise: Practice throwing the two scarves in an anti-clockwise motion, then practice throwing in a clockwise direction.
2 Scarf Columns: Throw one scarf up, move your hand across and throw the next scarf up, then return your hand to catch and throw the first scarf and then catch and throw the second scarf. Each scarf is going up and down in a straight line, just like an elevator/lift!

Now you are ready for 4 scarves (two in each hand) – which is why you came to this page in the first place! Pick up two scarves in each hand. The fountain initially requires each throw to start in the middle of your body and throw to the outside of your body (in other words, your left hand goes anti-clockwise, and your right hand goes clockwise)! Once this is mastered, you can try the following variations (remembering that the scarfs should be thrown and caught in the same hand for this series of patterns):

Columns: Throw a scarf up from each hand, then shift both hands to the left a couple of inches, and throw the next two scarves up in the air. Now go back and catch and throw the first two scarves, and then move again to catch and throw the second lot of scarves €¦and keep going! It takes a lot of effort to make this one look effortless!
Splits: Similar to Columns trick (above). Try throwing one scarf from each hand over to the left side of your body, then quickly move your hands to your right side and throw the other 2 scarfs. Can you keep this pattern going successfully? How wide a gap can you manage while making it look effortless?
Orbits: Throw a scarf from each hand straight up in the air. Now swing your hands (which are still each holding a scarf) around the scarfs in the air (orbiting around them). You may have time to circle a couple of times before you need to continue juggling. You can alternate orbits so that only one hand does an orbit, then on the next throw it’s the other hand orbiting. Very impressive effect.
Poi: If you can master the Orbit trick, then try considering what other poi spinning tricks you could do while maintaining a juggling pattern.

Transitions from 3 scarfs to 4 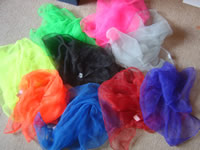 The Audience will be blown away with this next trick!

Juggle with 4 scarfs, then throw one extra high and go into a 3 scarf cascade. As the 4th scarf comes back down, blow it back up in the air. Now you have the choice to continue cascading and blowing one scarf in the air, or drop back into a 4 scarf juggle.

Catch one scarf on your head and go into a quick 3 scarf juggle before throwing these 3 up in the air and catching them on your head too.