The Convention for Rach and myself started on the Wednesday night when we got all our stuff packed and awaited the arrival of Hazel from the Isle of Man as she was coming to stay with us a day before the convention so that she could visit Stirling Juggling Project that night! After juggling finished, we returned to my flat we watched the BJC Derby DVD from last years convention as this would be Hazel’s first British Convention. 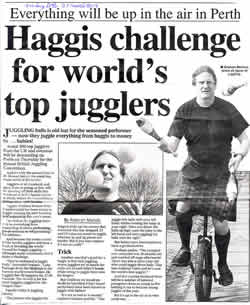 I particularly enjoyed my welcome to the Convention when Mini shouted “get a haircut you hippy” (I had a shaved head), and then Captain Duncan showed me where all the gang were camped so we could set up nearby. The convention pass (compass) was one of the best I have seen, and more than made up for the peg pass at the Scottish Convention (also ran by Graham and Britta this year!)

The convention was not well attended by jugglers from our project despite being less than an hour away instead of the usual trips to England each year! I had started up the Project back in January 2005 once again, but the new recruits were either tied up with final exams, or too busy (Timmy even managed to break his leg while out hillwalking!) Our beloved George couldn’t attend as he was getting ready to head to Spain 🙁 Gary Worrall also turned up at his first convention for years! Noeleen was in charge of security and also ran a stall, so we got to see her quite a bit too! Allen Goldie (from Old Town Jail) attended also. Captain Duncan and Ewan Uno were both in attendance and it was good to catch up with them too! 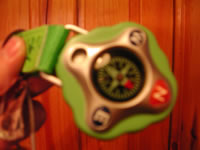 The campsite was extremely near the Sports Centre where everything happened, and we were only 5mins walk (across a beautiful park with stunning views) from the City Centre, so the location was perfect!

Our tent was very well lit at night as the floodlights were nearby! This was excellent as our torch batteries had all ran out! We had bought a new tent which was quite spacious, and we also brought a double airbed and 2 quilts so we were quite warm and comfy!

British Young Juggler of the Year

Congratulations to Luke Burrage for bringing this competition back after many years of absence and for hosting it also. It was disappointing that there were difficulties with the sound for most of the acts. The best (and most heartwarming) moment was when the sound completely conked out during a choreographed routine to the tune  “popcorn”, so someone grabbed the mike and sang/hummed the tune! 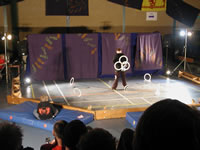 All 8 acts were fantastic. The judges picked the right act to win (John), but I voted for Arron Sparks as his act was the most entertaining and not just full of technical ability, and it used several of the songs that I used in my songs mix routine I wrote recently! Rach voted for Norby (ring juggler)

3 years ago, those people attending the British Convention were informed of the Queen Mothers death, and now this time round it was the turn of Pope John Paul II. We were told of his tragic demise at the very end of the Young Juggler of the Year show which left the whole event on a sour note, but then the next morning, found out that he had just eaten some soup, so it was truly a miracle! Rumours abound the whole next day with people in confusion and then he passed away.

It was Graham’s intention to open up this contest which is normally just contended once a year at the Scottish Convention, to give it more kudos and maybe make a few extra people make the journey to Glasgow to compete in the world record attempt (3, 4 and 5 haggis endurance records) next year! Luke managed to retain just one of his 3 world records. I managed to beat my previous best time in the 3 haggis endurance and got 6mins 20secs, so I was happy!

Excellent seating and stage area (much better than having it in a marquee in my opinion, but I know that others will disagree!) The only thing that let the venue down was the sound which kept playing up. 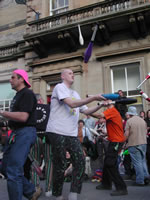 Workshops I Attended throughout Convention

Organised by Captain Duncan Smith. I had got quite a shock when the headline acts management phoned me up from the USA months prior to the event as they thought I was in charge of the whole event and wanted to sort a few things out! I was very proud that the Captain had managed to get the show called  “an extravaganza”, as this word was always in the shows we did as Stirling Juggling Project!

I wasn’t happy that we weren’t allowed to sit upstairs, because the usher said  “those seats are for the important people”. Once they had filled downstairs, they then seemed to let anyone take an upstairs seat (much better view).

General consensus on the show was that the 2nd half was miles better than the first, and that last years show was better than this one, but that this one seemed to have more variety (something to please everybody), which was a good thing. I can’t actually remember most of the names of the acts, so I am sure that people can remind me and I can update this part of the review!

At the half-time interval, Gary Worrall and myself grabbed all the balloons that were still littering every aisle, and got them out a side door, then jumped up and down on them to try and burst the lot as they had become a fire hazard. Some other jugglers heard the noise and joined us! 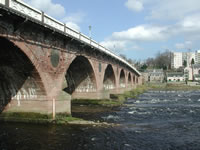 The Convention managed to break even thankfully by the Sunday. Not many jugglers had turned up compared to previous years, using the excuses of  “it’s too far”, or it will be too cold. I am certain that us Scots will wholeheartedly make the effort to head to Cornwall for next years Convention though!

The convention was enjoyable and seemed to go well. The decision was made that next years convention will be in Truro, Cornwall, and that in 2006 it would go to Nottingham. Both venues sound great!

Excellent to have this convention in Scotland. Shame that it wasn’t as well attended for this very reason though. Unlikely we will see another British Convention held in Scotland for quite some time. Enjoyed the convention loads. The parade was excellent. The games weren’t. Gandolf did a fantastic job of organising the parade and the workshops (all those that I attended were inspiring and entertaining). The public show was great, and the renegades were a bit hit and miss thanks in part to a poor sound system.

Overall, an excellent convention, and a big thanks to the people of Perth and the staff at Bell’s Sports Centre for making us feel so welcome!

Steve Thomson aka Stevie Vegas2 days ago
In at #72 of must-see Cultural shows for 2020! UK Pun Championships! Tickets for this show have sold out via the main festival box office. Please contact venue (De Montfort Hall) directly: 0116 233 3111. Do consider coming along to support me! https://www.dailymail.co.uk/home/event/article-7844831/Event-lines-100-cultural-attractions-2020.html

Steve Thomson aka Stevie Vegas2 days ago
My Photos from Day 1-3 of the 10-day Performer/Artist Challenge on my personal Facebook page. No explanations (unless anyone comments to find out more), just a chance to show the Arts in a positive light, and some wonderful photography!

Steve Thomson aka Stevie Vegas1 week ago
A 1 minute promotional Showreel about Circus Skills Workshops from one of my Agents (Primary Workshops for Schools). If you book through them, then please ask for me to deliver the Sessions!