The idea eventually led in 1997 to the creation of the original 1 litre Flairco bottle, and an industry was born! There is now an award winning set of DVDs available, so now is as good a time as any to give Flair bartending a go!

There have always been entertaining bartenders who worked with style, and the first true flair bartender was active 150 years ago: Jerry Thomas toured Europe and America with his bartending show, the highpoint of which was a fire show involving pouring whisky on fire between 2 solid silver lined goblets! Modern flair bartending grew up in the 1970’s, when the new singles bars (designed to attract women as well as men) opened, often employing out of work actors, comedians and street performers as well as waiters and bartenders. Soon bottles, glasswear and fruit were being juggled and the guests loved it. Flair even made it onto the big screen with the 1988 film Cocktail.

Nowadays, flair has advanced much further than Jerry Thomas could have ever dreamed of. Bars and restaurants that feature flair bartenders have grown to massive international chains and flair bartenders are some of the highest earning in the industry. The art of flair has also split into the fast, every day moves (called working flair) and the showy, high risk performance-orientated moves (called exhibition flair). For the truly dedicated there are hundreds of contests each year, featured on national and international TV programs, offering thousands of dollars in prize money.

The golden rules of flair are: 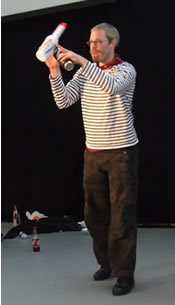 Good Luck and most of all, ENJOY!