The answer is Astrojax! This is a much more recent toy compared to the diabolo and juggling balls which have been around for many hundreds of years. New tricks are being invented all the time! Astrojax consists of 3 weighted balls attached by a piece of string with the middle ball freely moving. The construction of an actual Astrojax is however fairly complex as each ball has a precision machined metal weight in order to provide maximum performance and smooth action whilst playing. Never play with astrojax near people or objects as these balls can really hurt if they hit you!

There are 3 types of Astrojax trick that you may want to specialise in. I offer a quick description and some hints, but to find out more and to see excellent video clips, then visit www.astrojax.com !! Most Astrojax products sold in my Jugglingworld store come with CD-ROM’s full of trick video clip tutorials.

History of the Astrojax

Astrojax was invented by the American physicist Larry Shaw who discovered the basic principles while still at Graduate School. He was very interested and excited at all the complex patterns that this simple arrangement created and so he took time to work on the idea. It took nearly 2 years and hundreds of prototypes before Larry Shaw had his idea patented. 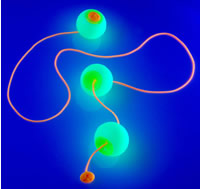 my Astrojax Products page (UK only)

Science Behind why Astrojax Works

Make sure you have plenty of space all around you, so that you won’t knock any items over. Astrojax is best practiced outdoors, but over a soft grassy surface in case you drop them!

Steve Thomson aka Stevie Vegas7 days ago
Highlights Reel for Stevie Vegas performing as "The PunDance Kid" in the Finals of the UK Pun Championships 2020 at De Montfort Hall as part of the Leicester Comedy Festival. I write a joke every day on Twitter @SteveJuggler